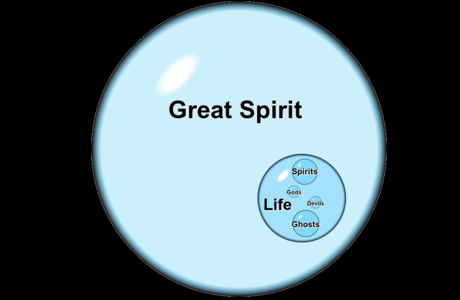 The Great Spirit is the creator of Man, Nature, Earth, and the Universe. The Great Spirit is not a God because all Gods are man-made entities that our spiritual leaders created to comfort the human fear of not knowing anything about the source of human existence and the existence of reality itself. Gods cannot and will never save us from Evil because like Puppet Masters, it is us who gave our various Gods moral judgement over our lives because we don’t like being judged by our peers and neighbors.

When we become secure in our faith we then either try to indoctrinate others with our beliefs or shun and kill them if they refuse to believe as we do. The HERU Interface is not an indoctrination platform. We simply encourage people to question the ethics of what they believe. We believe that, in terms of hierarchy, the abstract entities in existence are; the Great Spirit, Spirits, Souls, Life, Ghosts, Gods, and Demons.

The Great Spirit is the Pure Dark Energy Waves that form the Universe itself. It is both physical and abstract depending on the concentration of the Waves. Concentrated waves exist as Elements and Compounds of Matter while Abstract waves exist Pure Energy such as Electricity, Magnetism, and Gravity. The Great Spirit is always aware of its creation. In other words, the HERU Interface recognizes the Great Spirit as a Mind.

What is a Mind?

A Mind is an energy field that is generated by the sparking of Neurons between nerve endings in the Corpus Collosum strya, the area between the two hemispheres of our Brain. A Mind is therefore abstract in nature compared to a Brain, which is physical. If the universe is 99% abstract and that abstract portion is Pure Dark Energy then why can’t that energy be intelligent?

Some people believe that energy, no matter the source, cannot possess intelligence because intelligence is a property of a Brain and Mind. I say think again because while our Mind is dependent on our Brain to generate an energy field, the Great Spirit is already an energy field. It is only man who cannot yet understand how that intelligence is being produced. The answer is here within creation.

The Great Spirit created Matter and Life and through Life it created Humans. The process of Matter creation can be understood in a formula defined by Professor MOmOh of the Dohgon University of Thought. In his formula Professor MOmOh explains why there was no god that snapped his fingers to create the universe or Big Bang exploding everything into existence. Pure Dark Energy waves simply fluxed, or cut into half waves until sub-atomic particles formed.

Both Memory and the Senses are very important to intelligence. They highlight the difference between simply being aware and being able to Think and Reason. The difference between people who are cognitive verses those who are highly intelligent is the ability of the Mind to access Memory in a timely and extensive manner. Intelligence can be improved, however a small percentage of people are born with Brains that are genetically wired to process information more efficiently than others.

The fact that most people judge intelligence based on whether a living organism has a Brain or not is the main reason people get fooled into thinking that a Brain is needed in order for a Mind to be present. In actuality, Nature shows us examples of intelligence without a Brain all the time. We are just too self-centered to notice. Just do a Google search for “intelligence without a brain” and you will discover a whole new world you didn`t know existed before.

One example of intelligence without a brain that you will discover is a parasite flatworm called the green-banded broodsac, or leucochloridium paradoxum. Although it is most commonly observed in the jungles of South America, a group of hikers in Taiwan recently came across and filmed this sneaky Parasite at work.

The baffled hikers discovered and filmed a bizarre snail with green and orange flashing horns. What they didn’t know was that the Snail had been rendered a “Zombie” by the unseen parasite and was trying its best to get eaten by a bird. The Parasite, that doesn’t have a brain of any sort, lives and breeds in the bellies of Birds where it feeds on everything the Bird eats. Unfortunately, every time the Bird takes a poop, millions of Parasites get excreted as well. Since this particular species of Parasite cannot breed in any creature other than Birds, it must get back into a Bird to perpetuate its species.

Enter the Snail, a poop loving creature that Birds do not usually eat but the Parasite soon fixed that. Once sucked up by a Snail, the Parasites travels into the Snails brain, takes over its motor neurons and renders it a Zombie. The Parasites then travel into the Snails Eyestalks, where they cause the Eyestalks to swell and pulsate in attractive colors. This is done to mimic a Caterpillar; which birds love to eat. Once eaten by a Bird, the Parasites are back into the Birds intestines where they can reproduce creating the cycle all over again.

How did a Parasite that has no visible brain figure out how to do this? Some people might say its just instinctual but then I will ask what is the purpose of a Parasite? What is the purpose of a Snail or Bird, for that matter? Does Life just exist for existence sake? No, Life is learning and growing. It diversifies and creates by trial and error. It feeds on itself to power its more complex creations, all in its quest to achieve universal awareness.

Are you looking for "education fund"? Check out futurityinvest The passionate experts in this field are ready to answer all of your requests.
Share this...